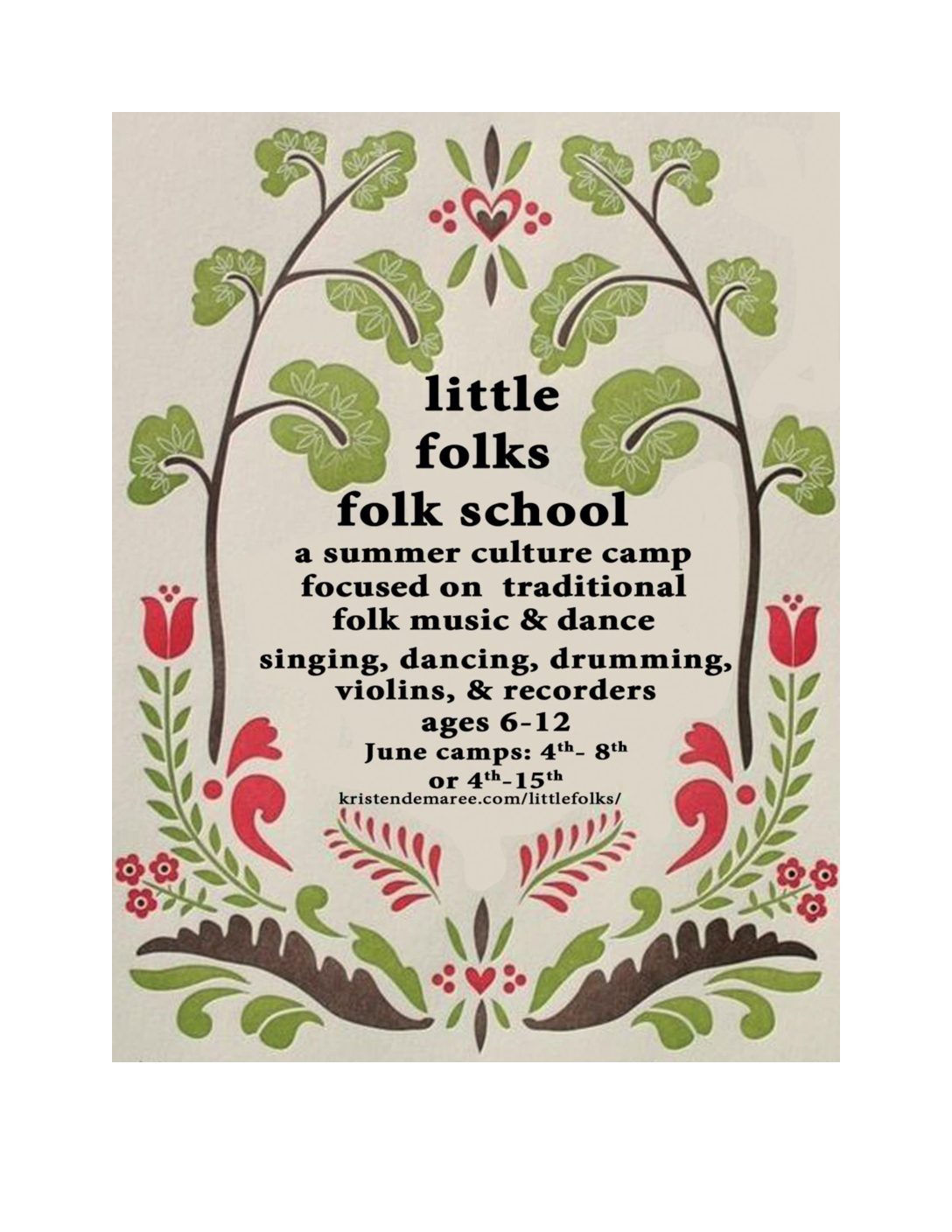 A summer camp that integrates music, dance and cultural art for a wonderful communal experience! Elin Palmer and Kristen Demaree join together to teach music and dance from various cultures around the world.

Students can learn the dances of the music they play on recorder violin, ukulele, singing and percussion.

They will be sharing this experience by playing music and dancing together, arts and crafts are also a part of the daily activities.

At the historic Altona Grange in Boulder County. 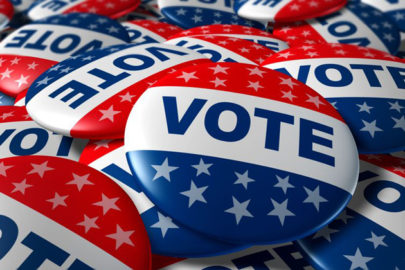 At 7:00 PM, on April 18, 2018, the historic Altona Grange Hall will host a “meet and greet” event as an introduction to the four candidates vying for a seat in the United States House of Representatives.  The Second Colorado Congressional District seat is being vacated by Jared Polis who is running for Governor.

Currently four individuals have announced their candidacy: Peter Yu, Republican; Mark Williams, Democrat; Joe Neguse, Democrat and Nick Thomas, Independent.  All four will join in a meet and greet format that will include both formal and casual exchange.  The public is invited.

“People often don’t know who they are voting for or why.  We need to be informed about the folks we send to Washington,” explained Laura Poirot, one of the Grange organizers.  “In recognition of the importance of the 2018 mid-term elections and with Jared Polis not running, it makes sense to learn as much as we can about new candidates.”

Altona Grange #127 is located at N 39th and Nelson and is one of 57 active granges in Colorado and one of three in Boulder County.  Altona Grange was established in 1891, named for the once existing town of Altona.  The 117 year-old building has been maintained, updated and continues to be a historical and current asset to Boulder County and its residents.  The Grange system is a nonprofit, nonpartisan organization based in more than 2,100 hometowns across America. With nearly 150 years of history, we have a spirit of grassroots advocacy, and a fraternal spirit that we’re happy to share.

Please make plans to come meet the candidates and be able to make an informed choice! 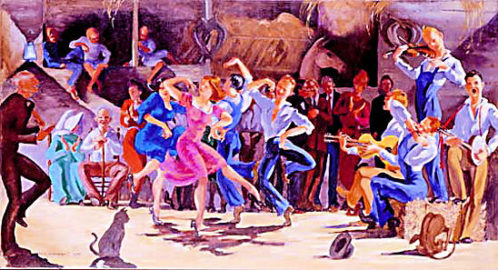 Tickets: $9/each, children ages 10 and under are FREE.

In celebration of Spring and community, we are bringing back one of the classics! Please join us at the Altona Grange for a foot-stomping good time, with easy-to-follow circle and square dances for everyone ages 0-101. You don’t need to know what you’re doing because our dance caller, and his accompanying string band will tell your feet what to do…

Dust off your dance shoes and mark your calendars for this one-of-a-kind old-timey dance. It’s a true experience of community and fun-we hope you’ll make it out!

Call or email to RESERVE

This two-day course provides an overview of the principles and practices of biological farming. Our goal is to build upon your knowledge and experience to find ways to increase the health of your soil and crops for greater yields, healthier produce and better marketability. Nearly 3,000 growers have attended the course since 2010; our attendance continues to grow thanks to word-of-mouth promotion of the course by previous attendees!

Participation-based with questions and answers, the workshop is designed for farmers, growers, and gardeners of any type to learn current research and proven methods, and go step-by-step through the processes that will lead to optimum crop health and sustained yield.

COURSE INSTRUCTOR: DAN KITTREDGE
Executive Director of the Bionutrient Food Association (BFA), Dan is the son of prominent leaders in the organic movement, and has been an organic farmer since childhood. His experience managing organic farms and developing sustainable agriculture techniques has connected him to farmers in Central America, Russia, India and the United States. Dan is passionate about raising the quality of nutrition in our food supply through collaboration with committed individuals, businesses, and organizations that support the value of people growing and eating really good food.

The workshop is designed to help participants grasp and apply innovative, reliable principles and practices for producing healthier, better tasting food crops. The course (click here for detailed syllabus) begins with an analysis of participants’ soil tests, and a discussion of recommended soil amendments and cover crops to address soil health deficiencies. We follow with a number of topics and themes related to helping plants achieve their full genetic potential through management of the environmental factors of soil, air, water, minerals and biodiversity. In day two, we immerse ourselves further with a review of plant nutritional needs by growth stage and an array of troubleshooting and diagnostic approaches to guide you throughout the growing season.

Each session consists of a classroom-style discussion and illustrative examples. Registrants are asked to procure their own soil tests prior to the course, and instructions for interpreting those will be covered during the workshop.

The cost of the workshops is $200 for the two sessions.
Students, BFA members, and NOFA members can take a $25 discount on registration.
Not sure about your BFA membership status? Check here.

Or click here to mail in your registration with a check or money order.

Presented in partnership with Mad Agriculture. 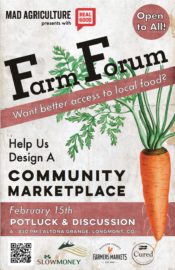 Free & Open to All! Monthly event, 6-9pm @ Altona Grange, Longmont, Colorado. Childcare for kids >5 years old is FREE. All kids are welcome, but younger ones will need to be watched by parents.

The Farmer Forum is a time to gather, eat and discuss issues in agriculture. The purpose of the forum is to build community, discover intergenerational wisdom and support one another in building a healthy and vibrant food system. The forum is NOT about seeking answers and making judgements, but rather sharing, learning, and opening our hearts and minds to all possibilities and potential. The forum continues the tradition of the grange, a place where a wide diversity of farmers and community members can gather to discuss and enact good service, policy and practice.

We eat potluck-style from 6 – 7:15 pm, 7:15 – 730 community announcements, and then discussion runs from 7:30 – 9 pm. The forum is an open canvas for people, farms and organizations throughout the Front Range to bring issues to the community circle. 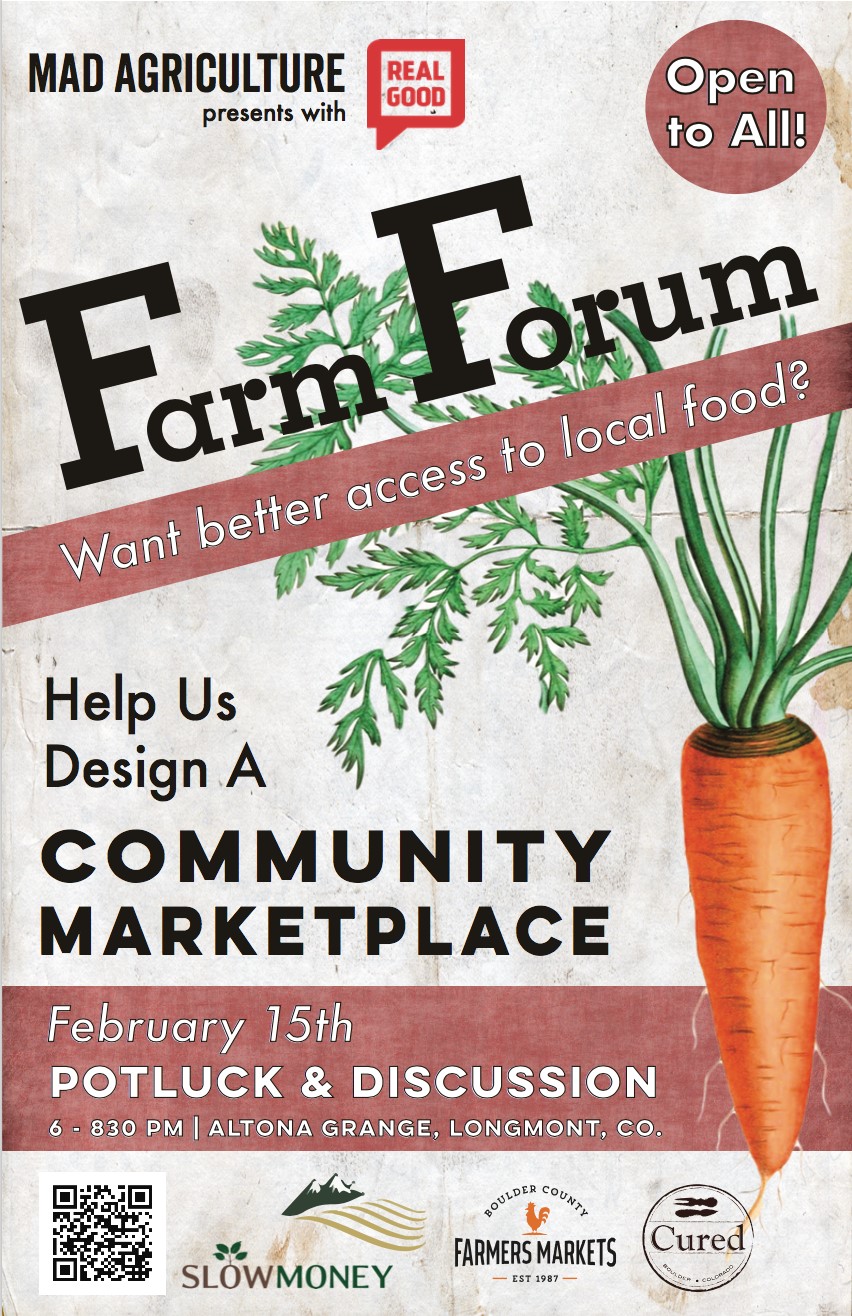 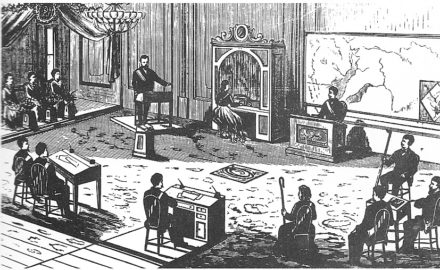 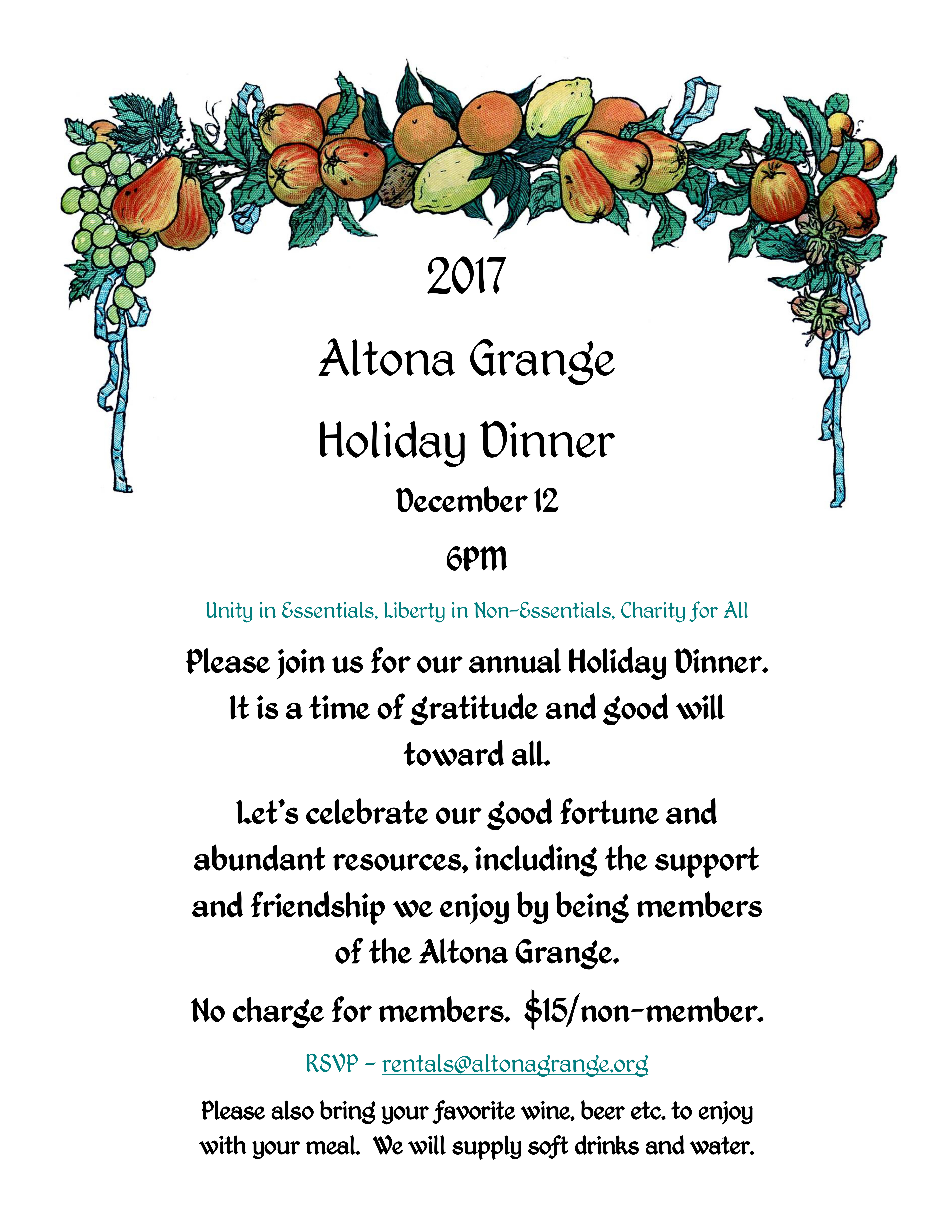 The September quarterly meeting is September 19th at 6 pm.  It is traditionally the annual meeting when the election to determine new officers takes place as well as a social gathering.

Grilled steak will be served, but please bring a side dish and your own beverages. 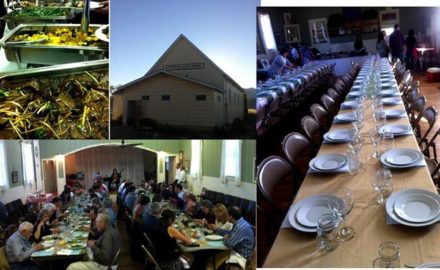